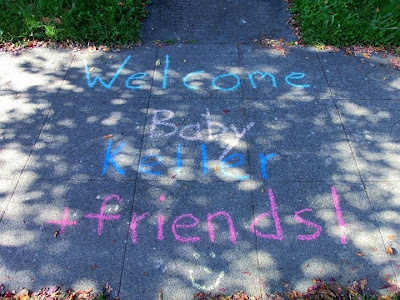 The summer is flying by. I can't believe we are almost into August which for me means the addition of a new member to my family. Before all of that craziness begins here is my latest update on what I have been up to over the past few months.
My sister got married the middle of June and I had the honor of being her matron of honor. The hardest thing for me with the wedding was getting my bridesmaid dress to fit. The dresses were purchased before I was pregnant so it was quite the ordeal trying to find fabric, which I ended up having to order directly from the company upon which they sent me the wrong color and finally sent me the correct color 2 days before I left for the wedding, then trying to find someone who could alter the dress affordably for me. Luckily one of my friends' mom had a lot of experience with alterations and fixed the dress for me. It looked amazing and I was so thankful for her help with such a short time frame to get it done. To date I have been in three weddings this year, which any other year would be a piece of cake but being pregnant it is a lot more work just in the attire let alone the tiredness. But each wedding I have been in the brides were more than understanding and accommodating. I spent time with my family over Joy's wedding weekend then flew back to Seattle on a Sunday evening.


By Wednesday I was back on a plane this time heading to Las Vegas to watch Levi in a competition. All I can say about Vegas is that it was hot! It wasn't even the hottest month for them but at that time I was about 7 months pregnant and I am always hot, even when it is 70. But Vegas was in the triple digits so I spent most of my time at the pool or in our air conditioned room. It was nice having those days to spend and relax with Levi without any real obligations. I savored the trip because we won't have many of those moments after the Baby comes.

I volunteered at The Meet of Miles that my brother and another club teammate spearheaded to help support Olympic hopefuls in our club. The meet was a success and I was very impressed with how well it turned out. John did an amazing job announcing and organizing everything. We had tons of prizes to give away and it seemed like everyone who was there had a great time. I definitely see this event growing year after year.

July 19th I was in another friend's wedding and had a great time. It was amazing how much changed for me physically in a month. I didn't even realize things had changed until I started dancing. At my sister's wedding I was jumping around and dancing just fine. I stayed up pretty late and didn't feel totally exhausted. Well a month later I stepped out on the dance floor at the July wedding and went to "bounce" around and whoa, was I in for a surprise. I felt like my feet were cemented to the ground. Was gravity playing a mean trick on me or was I really just that much larger and more cumbersome? Well I am sure you know the answer to that one. By 10 p.m. I was wiped out and had to head home. As I was getting ready for work today I pulled out one of my work shirts from the closet that I had just washed. I put it on and thought, "Oh no! I shrunk my shirt! Oh wait..." I had probably worn that shirt 3 days before, a week earlier max, and in that amount of time I grew enough to think it had shrunk. Yikes.
The rest of my time has been spent going to my midwife appointments, then scheduling more appointments, work, "craigslisting" to find deals on baby items, and trying to work out. I say trying because it is getting harder these days. I think a big part of it is mental. I am pretty certain my pregnancy running days are behind me. I ran once last week and this week will be surprised if I run at all. I know physically I can do it so long as I keep my paces slow and stay cool but it's really not comfortable anymore. Things just feel awkward and mentally I don't have the drive to go for a run. I have been walking with friends up to 5 miles at a time as well as spinning and elliptical for other cardio oh and swimming if you want to count me paddling around the lakes to keep cool. I still am "lifting" anywhere from 1-3 times per week. I probably do "cardio" three days a week now. I could do more but to be honest I am "lazy" right now. Plus I get so hot these days it's quite uncomfortable. I am nearing the home stretch and the guilt of not exercising every day (like I used to have) is long gone! My mind is pretty much all baby focused and I feel relatively good.

I have been having more appointments than usual as well due to the fact that I apparently have a rebel inside me. About a month ago she was in her head down position, ready to greet the world. The midwives commented about how ready she was! Well three weeks ago we discovered she didn't like it down there and instead is now sitting breech inside me. The appointment where I found out my midwife was checking my belly to feel her position. I could see she was having trouble finding the head down low and even mentioned that maybe she was too low for her to want to feel. To try to get a visual of the bumps I have been feeling in my belly I then asked my midwife what part of my baby was this hard round spot up near my right ribs. The midwife felt it then said, "How would you like to see your baby today?" I knew right away something was up because they had never done an ultrasound at these appointments and I was told after 20 weeks the next time I would see my baby would most likely be in person. My midwife rolled in this portable ultrasound machine and placed it on my belly. She then said, "That's her head." To which I exclaimed, "No!" Getting to see my baby this far along was pretty cool though because she looks much more like a baby than the last time I saw her. She is getting her fat which makes her look more plump and human rather than the skinny alien baby I saw in the second trimester.

My midwife gave me some exercises to try to help turn the baby. She was not very concerned as her baby was breech at 34 weeks and eventually flipped. I have been going in for appointments weekly now and at each appointment the baby has stayed in her breech position. I have another appointment tomorrow then next Tuesday (when I am 37 weeks and considered full term) I am scheduled for an aversion to manually flip the baby. I have my “ideal” birth plan but I also know it is not set in stone. My main goal is to have a healthy baby however she decides to enter this world.
Posted by Lois Keller at 10:30 PM 2 comments: