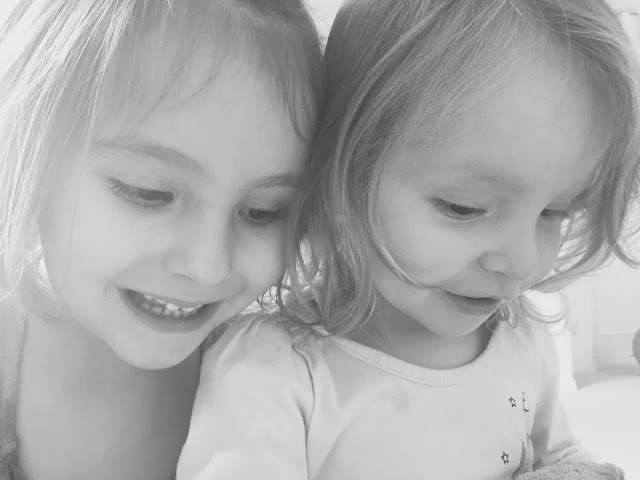 It’s been a long time since my last blog post, I have two very cute reasons why that is the case. The past month felt exceptionally long for me. It was a period of time where I am living as “the hunter’s widow.” Basically, between hunting and work I think I saw Levi maybe four or five days from the beginning of October-November 8th. He had training, then shift work, followed by deer season, back on shift, back to hunt for deer, back on shift, elk season, etc.
You get the idea. When I thought about doing a blog update with what’s going on, I stopped and thought, and really had no idea. I can’t remember anything these days. Everything is a fog. Nothing seems worth writing about, we just go through the same routine day in and out with outings here and there but as a stay at home mom nothing seems that exciting for people to read about. I mean at the end of the day, there’s this strange phenomenon where I’m exhausted and yet if I were to put down on paper what I “accomplished” for the day it looks like nothing. How is it I feel so busy throughout the day and yet it doesn’t seem like I get much done? The kitchen could still use some more cleaning, there are still little toys strewn about, I still have laundry to fold, and wash, and fold…when was the last time I cleaned the bathrooms? Washed the sheets? The list goes on and on.

And here is a perfect example of why I am busy and tired at the end of the day when it looks like nothing happened. Today the girls ran into my room at 7:30am. Eve comes to my bed and asks to come up. I pick her up for a snuggle only to soon realize her diaper had a major pee leak over the night and she is soaked, and now I am damp. I take her and change her, then strip her bed and get to washing her mattress protector, as that will be needed for nap later. After starting the laundry, I make them oatmeal with blueberries and as an extra fun treat today, sprinkles! The girls are itching to do some painting after breakfast. I clean up the kitchen and happily set out some paper for them to “finger paint.” I say “finger paint” because it soon turned into so much more than that. It started on their fingers and for Lily became a whole-body painting experience. I tried to stop her early on but she was too quick and once she was a mess I figured a little more wouldn’t hurt so let her enjoy herself.  Eve followed suit with painting her feet but was relatively clean by comparison. When they finished it took somewhere between 30 minutes to an hour to get everything cleaned and the kids bathed. I went downstairs to continue cleaning the paint in the kitchen. 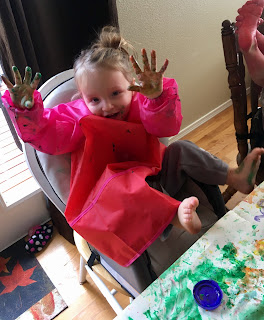 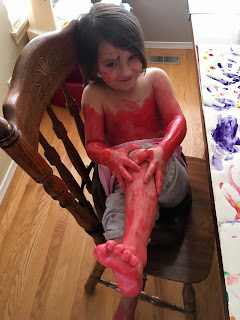 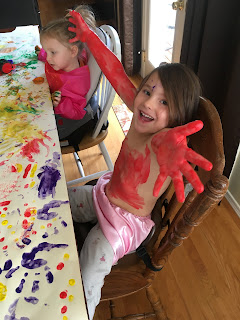 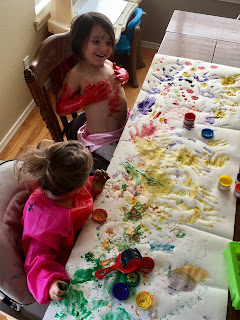 The girls were playing together nicely upstairs while I finished cleaning. Eve took off her diaper, put her potty seat on the big toilet, and went pee. I went upstairs to help her wipe and reward her with two chocolate chips. Lily gets two as well for being a good cheerleader. Eve screams, “I want to be naked!” I figure she’s been doing a good job with going in the potty and since she just went she shouldn’t have any accidents. Then the laundry chimes and I head downstairs to switch it out. After switching the laundry, I head upstairs and go in Eve’s room to put some things away. Suddenly Eve comes running out of Lily’s room and stops and stares at me. I know that look. That is the look of a kid who had an accident. “Did you have an accident?” I ask. She looks at me and runs away to hide. I go into Lily’s room and gasp. She didn’t have a pee accident. She had a huge poop accident. I grab some toilet paper to pick up the huge logs and call Eve back to be wiped. Finally, I am able to convince her to come out of hiding and get wiped. I head downstairs for the carpet cleaner vacuum (boy has that been a useful purchase) and get to work. When that’s finished the kids are telling me they are starving. I tell them to play a little bit while I empty the vacuum.

While downstairs, I go to the deep freeze, grab a frozen pizza, and start the oven. That’s going to be lunch. Which gave me 18 minutes to get this written. I just heard the oven beep. And that’s what’s been happening up until noon. So, it took over 4 hours of work to get the house looking like it did when we woke up. And that’s why at the end of the day everything and nothing has been accomplished. 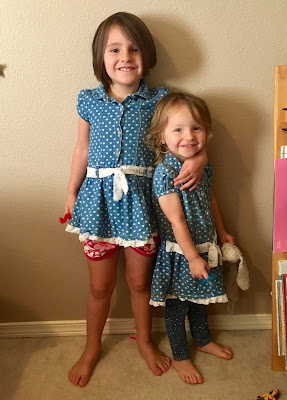