From Tuesday through Sunday I was in Walnut, CA for the Mt. SAC relays and I am only a couple days away from hopping back on a plane and heading to Palo Alto, CA for my next track meet so I will give you a brief update on my first steeple of the season.

I raced in the elite section Thursday night and the race felt great until the last two laps when my legs did not want to jump anymore and lactic acid was setting in. At the start of the race things felt very effortless and I thought I would have no problem getting a PR. But since I was unable to practice any steeple technique due to injury earlier in the year I soon discovered my jumps were subpar.
Levi took video of all of my water jumps and I was not pushing off the barrier. I was landing very deep and coming to a stop in the water which wasted a lot of time and energy! The majority of my hurdles were not that smooth either. I noticed I was taking off close to the hurdles and stuttering a little due to running in a pack and not being able to see the hurdles.
The good thing about all this is that my fitness is there and I just need to work on technique a bit more. I do not have a lot of time before Payton Jordan but I believe I can fix some of my issues and run faster. I will just need to be focused going into every barrier and remember what I need to do to execute proper technique.


Watch more videos on Flotrack
Posted by Lois Keller at 8:17 PM No comments: 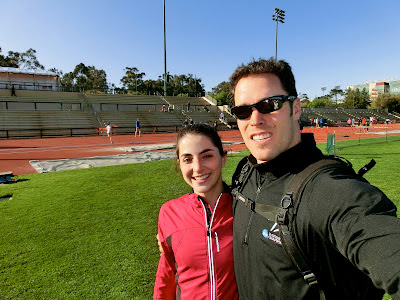 This past weekend I traveled down to Stanford University to open up my outdoor track season with a 5k. Going into the race I didn’t know what to really expect. I spent the month of March cross training and though I knew I had lost some fitness I still entertained lofty ideas of me running a PR. But realistically my goal was to run 16:40. This time is not my PR but it was a start.

And for fun here is the video of Levi's winning vault:

Off to the Sun!

Living in the Pacific Northwest can get a little dreary at times so when April rolls around I get excited as that means lots of track meets in warm, sunny California! My month of March was spent indoors doing a lot of cross training while my left Achilles and Soleus tried to heal from an injury I suffered at the end of February. Being indoors is not the most enjoyable thing for me, even less so when I am not even able to run. But the weather did make it a little easier to be indoors. If it was sunny and warm I might have gone insane, but with colder and very wet weather outside it was nice to sit inside in a nice 70 degree climate while I looked out through the large windows at the ships and boats going by.
So after a little over a month of cross training, the track season is upon me, leaving me a little concerned as to my fitness level. Before my first outdoor track meet I typically would have completed at least 10 track workouts. Right now I have done two, which is great considering where I was at even a week before my first workout. I am now pretty much pain free. I get a little tightness in the Soleus at times and my Achilles still has some weird bumps on it but they do not hurt! I have been seeing a PT at the Sports Reaction Center and am so thankful for their help.
On Friday March 30th I went to the track to attempt my first workout. It was a week before I was scheduled to race and I needed to do something. I decided to do 400s at 5k pace, nothing too far or fast. I ended up doing two sets of 10x400m with a one minute rest and injury wise it felt surprisingly good. Physically I felt a little “out of shape” with my breathing and turnover. On Sunday I ran my first run outside and I made it 12 miles with very minimal tightness that went away during the run. Then on Tuesday I did another workout. This time I did two sets of 4x800m with a minute break, starting at 5k pace and working it down the second set. I felt pretty tired and sluggish the first set then snapped out of it and felt great the second set. I know I am not as sharp right now as in the past but that is o.k. I am making progress in the right direction and will regain that fitness when it matters. If anything the month of March probably served as a nice break for my body. Now everything should be replenished and ready to go…at least that’s what I am telling myself.
Later tonight I will be flying out with my husband and brother where we will all be competing at the Stanford Invitational Friday and Saturday. A couple of my friends/Club teammates will be there so it should be a blast. I will be racing the 5000m. After two successful workouts I was tempted to debut with a steeple but I know I need to be patient and give my body a little more time to heal and get stronger. The steeple is a tough event on your body and I want to have some practice under my belt to make sure my leg can handle the jumping before I race it. But the excitement I have for it is a good thing, and good things come to those who wait. :)
Posted by Lois Keller at 9:55 AM No comments: