As believers do you ever not feel prepared if the end times were to happen in your lifetime? I know I do. I like to think that I am ready but my sin nature of fear gets the best of me at times and I find myself not feeling like I can handle what the end times may bring. I do not want to endure the hard times or see the world crumble all around me. I have this hope that it will be a slow build up to when Jesus comes back so I can be long gone before it happens. Because I know when that time comes, we will all be enduring some very hard times, much harder and evil than what we are living in today. Whether you take a pre-tribulation view (God will take the church/His believers to heaven so they don’t have to endure His wrath poured out on earth), a mid-tribulation view (God takes believers half through the 7 year tribulation) or a post tribulation view (Believers will have to endure the tribulations before God takes them away) hard times are a given.

I also fear that I won’t be able to withstand the evil when it comes, that it might happen so subtly I won’t recognize it. I would like to believe that I won’t get “duped” by the Anti-Christ or the False Prophet when they arrive on scene, but on my own strength I know I would be lost. I like to think that I could withstand all forms of temptation, I am a believer after all, but on my own strength, I know I will fall. So many of us can get caught up in our own ego and thinking that we are good people and will be able to spot evil a mile away. But Satan is a master deceiver, the Father of Lies, and we would be foolish to think we can withstand him on our own merit alone. We can’t.

That is why we have to put our full trust in Christ each and every day. We need His strength and wisdom to overcome the enemy. As believers we have to be even more discerning when we witness “miracles” for we are the ones who believe in miracles and look for them and may be more likely to think the signs we see are from God when they are not.

When I think of the story of Adam and Eve in the garden and Eve eating of the forbidden fruit, I like to think that I would never fall for that. I wouldn’t believe the serpent. His scheme looks so obvious to us but that’s only because we get to see exactly what happened as a result. It’s easy for me to think I would do exactly what God told me to do because I know He is good and has the best laid out plans for me. But that is arrogant to think. I fall like Eve, every day! We all do! We are tempted every day in many ways and we do not always resist the temptation. We all sin. Part of the lie we tell ourselves when putting ourselves in the place of Eve in the Garden, is that we are good people, we know right from wrong and we simply won’t do the wrong we shouldn’t do. Eve gets a bad rap in the Bible but she really is just a mirror to all of us when we think we know what is best and choose to go our way instead of following God’s.

In John 8 we see Jesus, teaching in the temple courts, when a group of Pharisees and teachers of the law come to Him, bringing a woman caught in the act of adultery. The law says they are to stone her. Jesus told them, “Let any one of you who is without sin be the first to throw a stone at her.” And you know what happened? They all left. Not one could stand and condemn her. They all sinned. Even the most “upright” religious leaders fell short. The only one who could condemn her was Jesus, and He told her, “Neither do I condemn you. Go now and leave your life of sin.” She was offered forgiveness in Jesus, not condemnation.

The apostle Paul summed up our sinful state well when he wrote in Romans 7:15, 18-19, “For I do not understand my own actions. For I do not do what I want, but I do the very thing I hate…For I know that nothing good dwells in me, that is, in my flesh. For I have the desire to do what is right, but not the ability to carry it out. For I do not do the good I want, but the evil I do not want is what I keep doing.”

None of us are without sin. We have all tried so hard to be “good” and have failed. We cannot overcome evil by relying on our own strength. It takes someone more powerful than Satan to help us overcome. It takes Jesus. Without Jesus, we would all be condemned to hell if we were to truly get what we “deserved.” It is arrogant of anyone to think they will be saved for being a “good person.” None of us are good. None are without blemish.

When the end comes, we do not want to be left unprepared. Whether the tribulation comes in our lifetime or not at some point we will all face an end and need to be eternally prepared. How do we prepare ourselves? One of the best tools we have is to read the Bible and surround ourselves with other believers.

I heard a story recently about a person who was in a “Christian” cult. They didn’t know they were in one at the time. They were being taught all sorts of falsehoods by their religious leader that he claimed were Biblical. I was baffled by this, thinking if they just opened their Bible and read what it says they would see that what was being preached was not true! I have found that many people who claim to be “believers” have not read the Bible and do not know what it says so they are even more vulnerable to deception. The leader stoked their egos of being good people and a part of some “club” where only they were saved. Even if they did read the Bible, many would not want to accept what it says. Who wants to hear they are sinful and deserve hell? No one.

We must be born again in Christ. “Put off your old self, which belongs to your former manner of life and is corrupt through deceitful desires, and be renewed in the spirit of your minds, and put on the new self, created after the likeness of God in true righteousness and holiness.” (Ephesians 4:22-24) We have to humble ourselves at the feet of Jesus and recognize our shortcomings, we need to see that we cannot save ourselves. We are not our own god. There are many (little g) gods vying for the number one spot in our lives, we have to be willing to set those aside, set our own personal pleasures aside, and put God first.

When you are born again you have a direct and personal relationship with God. He is not just some omnipotent, far-off God out there in the Universe. He is all powerful and all loving and knows everything about you. He cares for you and is not far away. He is with you and His Holy Spirit can dwell inside you.

As believers we should study God’s Word. We need to be able to draw on it to help us be discerning of the deception that is all around us. But knowing your Bible is not enough. You need to have a personal relationship with Jesus otherwise when those temptations come, you will know what you should do but you will lack the ability, the strength to carry it out. There will be many “good people” even “Christians” who know God, say they believe in Jesus, but don’t actually have a relationship with Him, that will fall for Satan’s deceptions. If you do not have a personal relationship with Christ and know what the Bible says and heed its warnings, it will be nearly impossible to withstand the evil one when he is right out in the open and many will fall for the anti-Christ and False Prophet. 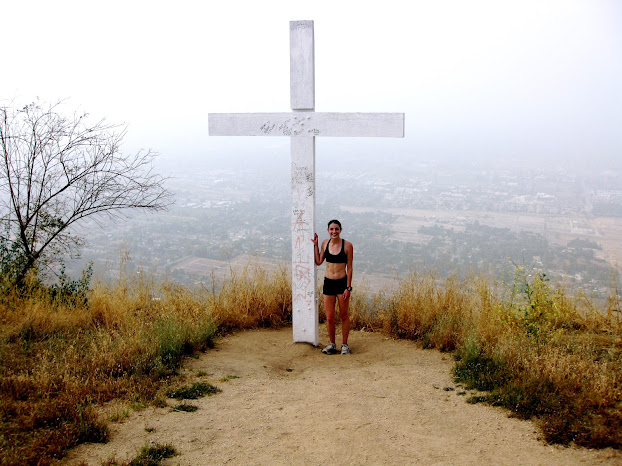 Lois
I started this blog when I was training post collegiately. It was a way to share my training and little bits of my life and evolved after I had kids before I stopped posting for a few years. Now I am back to share my journalings with you, most will be spiritual in nature, and maybe I'll use it as a place to give updates about me. I'm not quite sure yet!